Incorporated in 1894, Wheeling's beginnings came as an overnight stop for travelers from Chicago who were headed to the Wisconsin Territory via the overland trail now known as Milwaukee Avenue (Illinois Route 21). The string of inns, taverns and eateries established in the 1830's was the start of what is now Wheeling's renowned Restaurant Row.

Later, in step with the growth of Metro Chicago, Wheeling emerged as a center for industry and commerce in the 1960's. Manufacturing plants that clustered in Wheeling brought rail transportation (SOO LINE) for the shipping of freight to and from the area. These manufacturers were followed by the development of residential neighborhoods. Commercial development followed the population growth.


You can learn more by visiting the Wheeler Historical Society Website. You may also reach Joan Wiener with your questions at 847-229-0151 or by email. 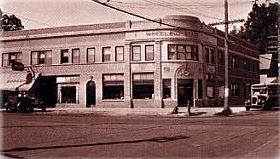